This study investigated the matching hypothesis of interpersonal attraction to determine its role in choice of marriage partner. A class of 39 Level I Aberdeen University psychology students aged between 18-25 years, was used to conduct a correlational study using photographs of 20 brides and 20 grooms.

The class was divided into two groups and asked to rank the physical attractiveness of each bride and groom on a scale of 1-20, with 1 being most attractive and 20 being least attractive.

There is evidence to suggest that long term relationships tend to occur between individuals who share a similar level of physical attractiveness. Walster et al (1966) used four judges to rate the attractiveness of 752 student participants.

Each student was asked to fill in a questionnaire and was told that they would be assigned by computer to a similar partner for the college dance. In fact each student was paired randomly with a member of the opposite sex.

It was found that the level of physical attractiveness was the most important factor as to whether or not a woman would be asked out on second date, but that partners who shared a similar level of attractiveness were more likely to still be together six months later.

Similarity in the level of attractiveness between partners also seems to be associated with progress in a relationship. Folkes (1982) analysed the behavioral steps taken to form relationships with 67 couples of a dating service.

Each member had access to information about a potential partners’ personality and interests in the form of a questionnaire, a photograph and a five minute videotape of an unstructured interview.

Dating decisions were therefore not based solely on a person’s physical appearance. It was found that the more similar the level of physical attractiveness, the more likely couples were to begin dating and continue dating later on.

The purpose of this study was to test the validity of the matching hypothesis in interpersonal attraction, so as to determine whether similarly attractive individuals tended to form long term relationships. Two groups were used to rank twenty colour head and shoulder photographs of brides and grooms on a scale of one to twenty in order of attractiveness.

To minimise the order effect, group one ranked brides first and grooms second, and group two ranked grooms first and brides second. The results from both groups were then collected and used to obtain a median class ranking.

The aim of this study was to test the matching hypothesis of interpersonal attraction by analysing the similarity of physical attractiveness between newly married couples.

The research hypothesis was that there would be statistical support for the matching hypothesis.

There were 39 participants consisting of 11 male and 28 female Level 1 Aberdeen University psychology students, aged between 18-25 years. All were members of a Level 1 group practical class.

The study was of a within subjects design. A Spearman’s Rank Correlation Coefficient (Spearman’s rho) was used to calculate the correlation coefficient between the median attractiveness ranks of brides and grooms.

In order to minimise the order effect, counterbalancing was used during the ranking procedure by dividing the class into two groups.

The researcher divided the class into two groups. Each group was further subdivided into subgroups each containing 3-4 participants. Group one participants were given an A4 sheet containing 20 passport sized head and shoulder colour photographs of brides lettered A-T.

Group two participants were given an A4 sheet containing 20 passport sized head and shoulder colour photographs of grooms lettered A-T. The class was then instructed to rank the brides (group one) and to rank the grooms (group two) on a sheet of A4 paper. The class was given 10 minutes to do so. Ranking occurred on a scale of 1-20, with 1 being most attractive and 20 being least attractive.

The class was again instructed to rank the brides (group two) and to rank the grooms (group one) and were given 10 minutes to do so. Ranking again occurred on a scale of 1-20, with 1 being most attractive and 20 being least attractive.

To determine the statistical significance between the bride and groom median ranking scores, Spearman’s Rank Correlation Coefficient was used to calculate a correlation coefficient.

Figure 1 shows the class median ranking scores obtained for each bride and groom couple in the form of a scatterplot. 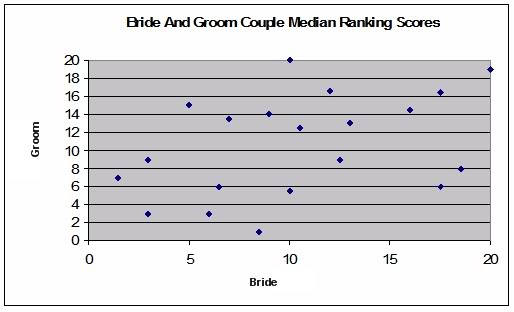 As the points in figure 1 gradually slope upwards from left to right, there appears to be a positive relationship between bride and groom median ranking scores. However, as the ellipse of the points on the scatterplot are fairly wide, this does not appear to be a particularly strong relationship.

Spearman’s Rank Correlation Coefficient was used to determine the correlation coefficient of the bride and groom median ranking scores.

A correlational value of Rho = 0.398; n=20; p<0.05 was obtained. As the obtained value is greater than the critical value (0.381), the results obtained are significant and confirm the positive relationship observed between bride and groom median ranking scores in figure 1.

The scatterplot in figure 1 suggested that a positive relationship existed between bride and groom median attractiveness ranking scores, and this was confirmed as being statistically significant by the correlational value of Rho = 0.398.

The research hypothesis can therefore be accepted, as the results obtained show statistical support for the matching hypothesis. These results support those of Folkes (1982) and Murstein (1972), as it appears that individuals who share a similar level of attractiveness are likely to form long term relationships.

One possible explanation which may help to explain why the matching hypothesis occurs is that less attractiveness individuals may feel a certain degree of apprehension or lack of confidence when approaching more attractive individuals (Huston, 1973).

As a result, rather than risking rejection, most individuals will tend to opt for the “safer” option by approaching someone who shares a similar level of attractiveness as their own.

However, care must be taken when interpreting these findings, as whether or not an individual has a fear of rejection is likely to be determined by their level of self esteem and their self concept.

An alternative explanation for the matching hypothesis is the social exchange theory (Homans, 1958), and may also cast light on some of the anomalous results obtained during this study.

It may therefore be possible that in some relationships, such as between bride N and groom J, other factors, such as money or status, displace the importance of physical attractiveness in forming long term relationships.

Another factor that should be taken into consideration when assessing the validity of the matching hypothesis, is how the results of this study were collected. Each group of 3-4 participants were created at random, resulting in some groups containing a mixture of both male and female participants of different ages.

As a result, the ranking of the brides and grooms may have been affected by males ranking differently to females. Another consideration is the effect of menstrual cycle phase on ranking, as women generally tend to prefer feminine looking faces but switch their preference to masculine looking faces during ovulation (Penton-Voak et al 1999). To obtain more accurate results, further study could use same sex and same age groups and divide women according to their menstrual cycle phase.

There are also issues with some of the materials used during this study. Not all pictures for example, were of the same quality and some faces were looking at an angle which may have affected the relative attractiveness, and thus the subsequent ranking scores, of the brides and grooms. Further study could easily eliminate this inconsistency by ensuring that all photographs were of the same quality and facial angle.

Finally, it was not known how long each bride and groom couple had been together, which may have lead to the false assumption that marriage was an indicator of a long term relationship when in fact it may not have been.

The results from this study provide statistical support for the matching hypothesis, thereby allowing the research hypothesis to be accepted.