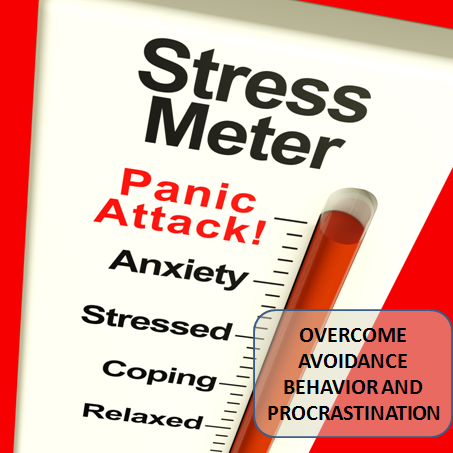 Have you ever put off doing something that you know you should do, and went and did something else instead? If so, then there is a good chance that you were using avoidance behaviors.

Avoidance behaviors are the things we do to distract ourselves from an activity or task to which we have associated an unpleasant emotion with. Usually, this emotion is fear, which can include things such as worry, anxiety and panic.

By doing something else instead of what we know we should be doing, avoidance behaviors allow us to momentarily escape our uncomfortable feeling, and by doing so, help to bring psychological relief.

For example, suppose that you had to book an appointment to see your dentist because you think that you may have a cavity in one of your teeth which could require a filling.

However, instead of picking up the phone and booking your appointment at the earliest opportunity, you do a bit of housework, watch TV and then go out shopping.

This is a classic example of an avoidance behavior, as you put off what you know you should be doing in favor of something else that is of less immediate importance.

All avoidance behaviors have a common outcome, they result in procrastination, which means that it takes longer for you to complete the task which you originally set out to do.

This also has the effect of increasing the intensity and duration of the negative emotion that you are trying to avoid, which, for some people, can cause them to procrastinate for so long that it makes the situation worse and they end up never starting their task.

Do You Use Avoidance Behaviors?

In order to become a more productive person who focuses their thoughts and efforts on activities of meaning and value, and away from activities of distraction and insignificance, it’s important to recognize when you are using avoidance behaviors so that you can stop them and return back to your primary task.

Some examples of avoidance behaviors include:

Cleaning your desk, browsing the internet or checking your emails when you should be making a phone call or writing a report.

Taking long breaks instead of promptly returning back to work.

Chatting with friends instead of working.

Scratching or massaging yourself as a means of escape.

Looking up at the ceiling, looking out the window or daydreaming when seated at your desk.

Saying that you will do it later or do it tomorrow.


Claiming that you have changed your mind about something, when in reality you haven’t.

Downplaying the importance of your task so that you feel less guilty for not doing it.

As you can see from these example, avoidance behaviors can be quite varied and include both the physical and mental activities which you use to distract yourself from your primary task.

It’s important to remember though, that not everything you do is an avoidance behavior as you may genuinely have to do something else at a particular time.

But during the times when you know that you are essentially lying to yourself or trying to escape from something which you find uncomfortable to confront, those are the behaviors that you need to be especially watchful of as they will reduce your productivity and could make things worse in the long run.

The Role of Fear

These fears are known as irrational fears, and are things which you have learned to fear as a result of a past association which you have made (i.e. classical conditioning).

When these fears are examined however, you will often discover that they don’t really pose a threat to your physical safety, even though you are reacting as if they really do. Hence why such fears are called irrational fears.

The significance of all this is that the more you fear something the more likely you are to try to avoid it, even if what you fear doesn’t actually exist or exists differently to how you imagined it.

As fear is also something that grows the more you try to hide from it, the best thing that you can do to stop such fears from controlling your life is to confront them head on.

When you do something that you fear you will often discover that what you imagined would happen turns out to be far worse than what actually did happen, and so by doing the things you fear, you eventually train yourself not to fear them anymore or to fear them less.

This in turn, will make it much less likely for you to engage in avoidance behaviors, thereby giving you more power to stop them when they occur.

To help you with this process, try to practice the following steps the next time you find yourself engaging in distracting behaviors.

1) Decide what it is you need to do, your primary task.

2) Think about any fears, worries or anxieties you have relating to your primary task.

3) Determine what is the worst thing that can happen for each of your fears. Is it really that bad?

4) Start working on your primary task at the earliest opportunity, no matter how small of a start you make.

The purpose of steps 2 and 3 is to identify the things you fear. This is important because fears that have been learned through past association will occur automatically and without you even thinking about them.

But, if you are able to examine those fears, you will engage the thinking part of your brain known as the neocortex which allows you to logically and rationally analyze a given situation.

In this frame of mind, you will be much more likely to successfully control your fears, and determine whether they are actually something which you should be fearing.

You may also be able to use your fears to your advantage. For example, if something bad might happen as a result of you not starting your task, then you can use that concern to motivate you to start your task as soon as possible.

Alternatively, you may want to think about the benefits of completing your task and the relief that you will experience when it is over.

The last step of this process, step 4, is the most important, because once you make a start on something it then becomes much easier to keep on doing it because you allow yourself to build momentum.

You will also find that starting your task will result in the dissipation of many of your fears, because most of the things that we fear or worry about never actually happen.

Whatever you do, avoid delaying or postponing your task to a later date, because that will only intensify the fears that you are experiencing and cause you to delay your task further by engaging in more avoidance behaviors.

How to Overcome Procrastination

People who procrastinate know what they should be doing, but choose to do other things of less importance instead.

The trouble with procrastination is that it tends to result in a lot of wasted time, which not only delays the start of your primary task, but could also put it in danger of never being completed at all. 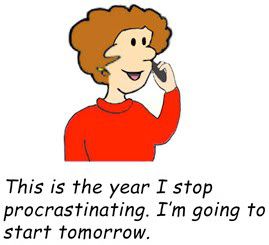 As a result, procrastination is one of the main ways that people self sabotage potential successes they could be having in their life, which can then result in feelings of guilt, worry and a lack of perceived control due to their mounting work load.

In the long run, if procrastination is allowed to continue it may even start to affect a person’s level of self-confidence and self-esteem, causing them to seriously doubt their ability to successfully complete a task which they or another person have set for them.

A simple method that can be used to do this, is mental projection, and most highly successful people use this technique in one form or another.

Rather than focusing on the present pain associated with doing a particular task, high achievers think about the future benefits that they will receive or obtain once that task has been completed. Alternatively, some people find it more effective to think about the future pain that could come from not doing a task.

Either way, the motivational energy that they get from thinking about their task as being already complete, gives them the push they need to get started on it and persist through until it’s finished.

He once remarked how he hated training, but said that he managed to get through the pain and discomfort that came with his long intensive training sessions by picturing himself as a champion and the rewards he would receive by becoming the best.

In this way, he was able to overcome his present pain by focusing on his future pleasure.

Just like Muhammad Ali, the stronger the pleasure or pain that you can associate with your task, the less likely you will be to procrastinate on it.

The next time that you feel as though you are procrastinating, use the following three steps to help you get started on your task. This is a technique that is used in neuro linguistic programming (NLP).

Think about your task as already being complete. Try to imagine what it would look like, feel like or sound like. The more senses that you can use, the more powerful your visualization will be. Focus on the benefits that you will get and the sense of relief that you will feel once it is over.

The next step is to intensify the pleasant feelings that you have associated with the completion of your task. Make your images bigger and brighter. Make feelings more intense. Make sounds louder, richer and more powerful.

The idea here is to create an exaggerated version of reality, to create a mental representation that excites you and energizes you.

For the final step, stop what you are doing and start your task immediately. This is very important because the motivational energy that you have generated from your visualization exercise is best used straight away.

Two phrases that you can use to help you in this regard are “do it now” and “just do it“. Keep saying these phrases to yourself and you will find it very difficult to procrastinate! 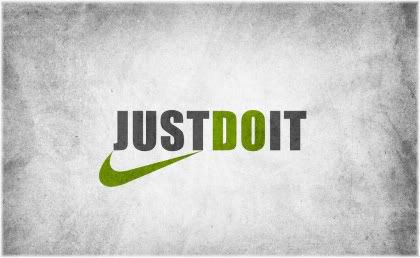 The three-step process that has just been described is a mental visualization technique which is used by highly trained successful athletes.

From Start to Finish

The worst thing about procrastination is that the pain you have associated with a particular task is almost always worse than the actual task itself. This is why people keep procrastinating, because essentially, they fear their task so much that they don’t want to confront it.

However, by starting your task at the earliest opportunity, most of these fears will quickly dissipate as you will be too focused on doing your work that you won’t have time to think about fear or worry.

Even if you don’t complete your task in one go, the fact that you have made a start will help you to build momentum which will then make it much easier for you to return to your task and finish it later on.

So the next time you feel that you are procrastinating and avoiding doing something you know you should do, practice the three-step mental visualization process to immediately stop your procrastination.

Then get started on your task immediately, even if it’s just for five minutes! The sooner you get the ball rolling, the quicker and easier it will be to get things done.