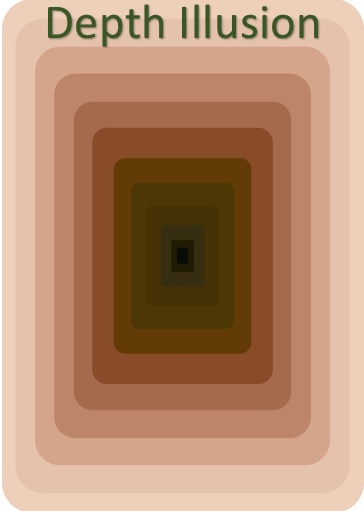 Depth perception is concerned with why we see objects in 3D rather than as flat, and how this is accomplished.

This is quite an interesting question if you stop to think about it, because although the eye itself may be a 3D ball, the retina is not, it’s flat. So how does a flat surface give us the perception of depth?

The best way to approach this is by using the example of a painting on a flat canvas. Even though just like the retina the canvas is flat, the picture still appears to have depth to it.

Since the pupils of the eyes are roughly about three inches apart, this means that the right eye gives a slightly different image to that of the left eye. The disparity (difference) between these two retinal images (retinal disparity) can be used as a cue for depth/distance.

This ability of the brain to merge two images together is sometimes called the “zipper effect”, and it is partly as a result of retinal disparity that the images we see appear to be in 3D.

The fact that depth perception is possible with only one eye shows that there are other visual cues which allow us to perceive depth, and that this depth is not solely a result of retinal disparity. You can test this out for yourself right now by closing one eye and looking around you.

This shows that there are certain monocular cues (described below) which allow you to perceive depth.

Below we look at some other ways that the perception of depth can be created.

Linear perspective describes the tendency of parallel lines to appear to converge at the horizon.

This is also known as the Ponzo Illusion, which you can see an example of in the picture below. Notice how the converging lines create depth in the image.

Interposition occurs when one object is blocked by another. For example, a card placed in front of another card gives the appearance of the other card being behind it.

Shadows are differences in the illumination of an image, and help us to see 3D objects by the shadows they cast. If something is 3D, it will cast a shadow, if it is 2D, it won’t.

Texture gradient refers to the level of detail that you can see in an image. The closer an image is to you, the more detail you will see.

But if it is too close, then that detail will start to become distorted or blurry. Likewise, the further away an image is, the less detail you will see it in.

Motion parallax describes the tendency when moving forwards rapidly to perceive differential speeds in objects that are passing by.

A good example of motion parallax occurs when driving. If you see a lamp-post in front of you it appears to approach slowly, but just as you are passing it, the lamp-post seems to flash by quickly in front of you.

If you were to then look back behind you, the lamp-post would appear to be slowly moving away from you until eventually it looked stationary.

Size constancy is the tendency to perceive objects as staying the same size, despite changes in your distance from an object.

For example, if you look at the picture below, even though the people in the background are further away they still appear to be of normal size.

To show you just how size constancy works, have a look at the picture below where a cut out of the person has been placed in the foreground.

Even though the cut out picture is exactly the same size as the person in the background, he now appears to be much smaller.

This occurs because when you see an image, the visual system uses various cues from the surrounding environment to make up the image you see which then creates a type of visual illusion.

In the example given above, by moving the background figure to the foreground, this illusion is broken down which then causes you to see the person in an apparently different size.

In the example below, you can see how the brain uses background images to create size constancy. Again, even though the image always remains the same size, your perception of that image is altered due to the background.

In this example, the background makes the figure appear larger.

One of the most fundamental ideas of Gestalt psychology is that we are born with some basic “organizing tendencies”, such as the ability to distinguish an object from a background.

For example, suppose that you are walking along a country path and in front of you there is nothing but open fields, clear sky and a thatched cottage. Using Gestalt terminology, the cottage that you see is called a “figure” because it is a well-defined object that stands out.

Surrounding that cottage is the sky, which again, using Gestalt terminology, is called the “background” because it surrounds the figure. What I have just described is known as “figure-ground perception” and is an inborn organizing tendency which we all posses. That being, the ability to distinguish a figure from a larger background.

The reason it is called an “inborn organizing tendency”, is because we are able to distinguish figures from backgrounds from birth. For example, a baby may reach towards an object placed in front of it, which shows that it is able to distinguish that object from the background which surrounds it.

Since nobody taught the baby how to do that, this suggests that we are not born as “blank slates” into the world, but rather, have some inborn basic programming which allows us to explore and interact with the world.

We can summarize the main principles of figure-ground perception by saying that, in general, the figure is the smaller object and appears to come forward or be slightly in front of the background. For example, in the image below, blue is the dominant color but green seems to be in front of it.

Now green is the dominant color, but blue seems to be in front of it.

In both examples, although one color may appear to be in front of the other, in reality, they are not. This shows that in some cases, figure-ground perception is a mental construction and occurs as a result of how we mentally organize what we see.

A good example to demonstrate how figure-ground perception can be both reversible and a construct of the mind, can be see with optical illusions.

Looking at the picture below, what do you see?

What you have just done here is shown to yourself how figure-ground perception can be reversed, which shows that in this case, it is a mental construct of the mind.

Illusions are usually associated with a particular sense. For example, the moon creates an optical illusion by appearing larger when it is nearer the horizon and smaller when it is higher and overhead.

Illusions are sometimes confused with delusions and/or hallucinations, but these are something completely different as you shall see below.

A delusion is a false belief. For example, if I were to believe that I have eyes on the back of my head, then this would be a delusion because what I believe to be true is not.

Although illusions are normal and experienced by most people, delusions and hallucinations are generally associated with mentally disturbed people. Overall, illusions show us that the world we see can sometimes be created or altered by brain.

Below you will find a description of each of these Gestalt laws, or principles, in form perception.

In the example below, the dots are arranged within close proximity to each other which produces a strong impression of a square.

However, in the following example, the dots are further apart which gives a weaker impression of a square.

Although it is not practical for me to do so here, if you were to mentally expand the distance between the dots so that they expand further and further apart, you will get an idea of how proximity between the elements of a Gestalt (organized whole) can affect your perception of it.

A similar principle can be found when looking at constellations in the night sky. The nearness of certain stars to each other allows us to see outlines of images within them.

For example, the word “EruptingMind” is written with all the individuals letters (elements) in the same color. As a result, the organized whole (EruptingMind) is easily understood.

However, if I were to now use different colors for the letters such as EruptingMind, the dissimilarity between the individual letters makes the whole less coherent or recognizable.

Another example of the similarity principle can be found in the example below. Note how the similar colored dots appear to form a line, almost as though they were one unit.

Closure refers to the brains tendency to fill in gaps of information so that something becomes a complete whole. For example, if you look at the picture below, you will see a circle and a triangle.

Although you may see a circle and triangle in the picture above, in reality, there is no circle or triangle. The reason you see these shapes is because the brain has a tendency to fill in the gaps for objects which are familiar to us.

Another example of closure can be seen in the picture below.

Closure also occurs when you watch TV. Even though what you perceive is fluid movement, what you are actually seeing at the level of sensation, are a series of still flashing images. It is your perception of those images which makes them appear to move.

Common fate occurs when all the elements of an object move together, which then makes them distinguishable from a background.

For example, if you are walking outside in the park and there is a green snake lying still in the grass, you would probably not notice it. But should that snake begin to move, you would notice it immediately because its movement causes your brain to organize it into a figure against a background.

Another example of common fate can be seen below. Here the dots that move together are seen as a single unit, as a line.

So the more similar things are, the more we associate them as having a common fate.