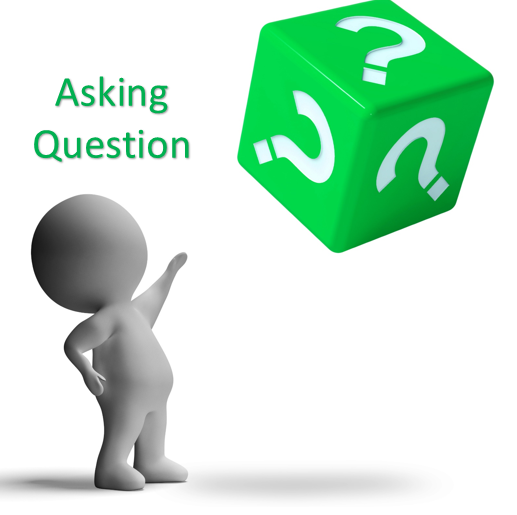 The effect of this is that by the time we are adults, we have become conditioned to automatically feel the need to answer a question when it is asked.

When someone can’t answer a question, we look down on that person and suspect that they may have something to hide or that they don’t know their subject very well.

If you wish to become a better communicator, it’s therefore very important that you become aware of the different types of questions that you can ask and be asked by others.

But before we get into that, lets first look at some of the benefits that asking questions can bring.

Below are listed some of the main benefits of asking questions:

When you ask the questions you control what topics or issues are discussed.

Depending on the type of question that you ask, questions can alter the mood of a conversation in either a positive or negative way. This is usually done by first making a statement and then ending it with a question.

You can tailor this question to make a person feel angry, happy, fearful or suggest that you suspect them of something. It all depends on what mood you are trying to put them in.

If a conversation has suddenly strayed away from the central topic, then asking a question can get you back on topic and discussing the key issues. Asking more questions about the issues can then speed up the pace.

Conversely, if a conversation is progressing too quickly and you need more time to think, you can use a question as a diversionary strategy to get the person to momentarily focus on something else.

This is especially useful when someone is arguing with you. By asking a person questions about loosely related issues for example, you can break their train of thought and slow them down. This will then calm them down and make them feel less angry.

However, be careful when using this strategy, as you may end up frustrating them and getting them more annoyed and angry if you ask too many irrelevant questions.

When you try to persuade someone using reasons, they are more likely to resist your persuasion attempt.

This is because giving someone a list of reasons why they should or shouldn’t do something, can make it appear as if you are obviously trying to manipulate them. People are far more likely to be persuaded when they do not realize that they are being persuaded.

Questions therefore allow you to persuade in disguise. Rather than you making a statement yourself and causing it to look like you are trying to persuade them, by asking a question, you can get the other person to think or respond in a certain way.

This way you can conceal your persuasion attempt, whilst at the same time, make the other person think that they responded how they did without being influenced. What they didn’t realize however, was that by asking a question you implanted a thought in their mind which then influenced how they responded.

For example, if you want to tell someone how good your product is, then rather than making a statement about the quality of your product, which they will naturally be suspicious of, you can turn your statement into a question such as:

“Do you know how many satisfied customers we have had in the past year?

Obviously, the person will not know the answer, but that was not the purpose of your question.

The purpose was to imply that their have been satisfied customers in the past, thereby implanting the idea in their mind that you are selling a good product. Essentially, what you have done here is disguise your persuasive message as a question.

Questions are therefore an excellent way to get people to think about or say certain things, without them fully realizing that is what you wanted them to think or say.

The things you ask another person can have a powerful effect on the type of conversation that you have with them. Below, we look at some of the different types of questions that you can use and why you might want to use them.

Open questions tend to be most effective when you want to gather information about someone, or if you require further clarification on a key point.

An open question is one that cannot be answered with a one or two-word answer. For example, “What did you do yesterday?“, “What are your plans for next week?” or “How does this work?” are all types of open questions.

In general, all open questions will start with “what“, “how” or “why“.

Open questions can get a person to talk and open up. This can be particularly useful in negotiations or in general conversation with someone who you have never met before.

Once that person opens up, they are likely to reveal information about themselves which you can then use to your advantage to develop rapport.

You will often find that once you get a person to open up, they will provide you with lots of free information. This is simply extra information which you did not specifically ask for.

Open questions can therefore help to make you a better communicator and will improve your overall communication skills by making you a more interesting person to talk with.

Open questions are not perfect, and so should not be relied upon exclusively. All they do is get the other person to talk, and they don’t even guarantee that.

For example, you can ask someone “What did you do yesterday?” and they could reply “Oh, nothing really” because they don’t feel like talking or discussing the issue with you.

This is quite an important point to note regarding negotiation and communications skills in general, as people will often not behave in the way that you would have expected them to.

As a result, you need to be prepared for such outcomes and have other skills available that you can use.

Closed questions are those which require a one or two-word answer. For example, “What time is it?“, “What’s your name?” or “What star sign are you?“, are examples of closed questions.

However, it’s important to remember that just like with open questions, people may behave unexpectedly and give long responses to your closed question.

Closed questions are most useful when drawing a conversation to a close or when trying to get a definite answer.

You can use closed questions for example, to narrow the focus of a conversation and eventually pin that person down into making a definite commitment or conclusion.

As a result, closed questions tend to be most appropriate towards the end of a conversation.

Another advantage of using closed questions, is that they can also be used to fish for interesting topics to discuss should you feel that you’re running out of things to say.

You could, for example, try to determine what sort of things a person is interested in by asking them “Do you like football?“.

Once you have gathered this information, you can then tailor your conversation to better suit their character and personal interests which will then make you a more interesting person to talk with.

The main disadvantage of using closed questions is that because they generally result in a short answer, they are not something that you can solely rely upon in a conversation.

If all you do is ask closed questions for example, then it will seem like you are bombarding the other person for information as though you were conducting an interview.

In the wrong situation, this could make your listener become defensive and unwilling to talk, as they may start to question why you are trying to find out so much about them.

Whilst open and closed questions certainly are useful in helping you to communicate more effectively with another person, their main limitation is that they don’t necessarily provoke people to change the way they think or the things they do.

Disturbing questions however, can provoke people into change because they tend to result in an emotional effect in the listener.

To use disturbing questions, you first have to find a certain problem or concern that a person has. This could include things such as money, health or relationships.

You then need to phrase your question in a way that will frighten or disturb that person, to make them sit up straight and really pay attention to what you have just said or proposed.

By doing this, you will actively shift their thinking and get them to want to do what you are saying.

For example: “Did you know that ten people get attacked by crazed animals at the zoo each year? So please, keep your passenger window closed!“.

In this question and statement, the aim was to get a child to keep their passenger window closed whilst at the zoo.

A straight request may have been simply ignored because the child might not have understood why their parent wanted them to keep the window closed.

But with a disturbing question, the child is much more likely to take note of what was said and then act upon it. This is because emotions tend to be very powerful motivators of one’s behavior, which in this case, was the emotion of fear.

A leading question is one that alters the way a person perceives a fact or event.

This was once demonstrated in a psychology experiment where people were asked a series of questions after watching a car accident on film.

So just by changing the way that the question was asked, the researchers were able to influence how fast each group perceived the cars to be travelling!

There was, in fact, no broken headlight! This simple leading question altered their memory and caused them to recall something which didn’t even happen. This is how powerful leading questions can be in influencing someone!

A rhetorical question is one that you give the answer to by asking the question, and so you do not expect a response.

For example, “Do I look like I give a damn?“, “You know what I mean?” or “What do you think I am? Some kind of idiot?” are all types of rhetorical questions.

Rhetorical questions are used to engage your listener and make them think about the obvious answer without you having to state it. Because you are engaging the listener, rhetorical questions also tend to be much more persuasive than direct statements.

One disadvantage, however, is that the answer your listener comes up with largely depends on their interpretation of a situation and your body language.

As a result, they may not always come up with the answer that you were trying to convey, and so sometimes, you may find that your wires become crossed resulting in confusion in your conversation.

So if you see a person look puzzled in response to what you have said, then be sure to follow-up with a quick clarification so that misunderstandings can be prevented.